Steyning was once one of the most important places in the county of Sussex. Though now about five miles from the coast,  it used to be a prosperous port with a market and a mint.

The small town has a large number of historic buildings, including many from the medieval and Tudor period. Amongst them is the Old Grammar School, founded in 1614 by William Holland, and occupying a set of 15th-century buildings.

Steyning Museum, on picturesque Church Street, houses exhibits telling the story of the long history of the town and the area. It is usually open all year with free admission.

Eating out and Shopping in Steyning

A great advantage of staying at Rosebud Cottage is that you will be just a few minutes walk from the High Street, which has interesting independently run shops. I particularly like the Steyning Bookshop and Cobblestone Walk:  This is a unique shopping arcade, with 25 units.

You can sit inside or outside at the 16th century Cobblestone Tea House and enjoy a snack. Steyning Tea Rooms and Victoria’s Sponge are also amongst my favourites.

There’s a supermarket and two butchers in the High Street  – whilst the Sussex Produce Company stocks high quality produce and some excellent ready meals! You can shop for food seven days a week and until late in the evening.

Steyning already existed when, according to the legend, St. Cuthman founded a church there, perhaps in the late 8th or early 9th century.

His legend states that he was a shepherd who cared for his paralysed mother after his father’s death. When they fell on hard times and had to beg from door to door, he built a one-wheeled cart in which he moved her around with him. When the rope attached to the cart broke he accepted it as a sign from God to stop at that place and build a church.

After the Norman Conquest of Britain in 1066 the Normans rebuilt St Cuthman’s church and created Bramber Castle.

This was founded by William de Braose as a defensive and administrative centre. It was held almost continually by de Braose and his descendants from its foundation by 1073 until 1450. However there was an ongoing power struggle for control of the local area between William de Braose and the monks of Fecamp Abbey in Normandy.

In the 14th century, the River Adur began to silt up and the town’s use as a port became difficult leading to a loss of trade and population.

The monks of Fécamp Abbey re-dedicated the church of St Cuthman to St Andrew in the 13th century.

Steyning began returning two members of parliament from 1278 but subsequently became a ‘rotten borough’ as the population decreased. 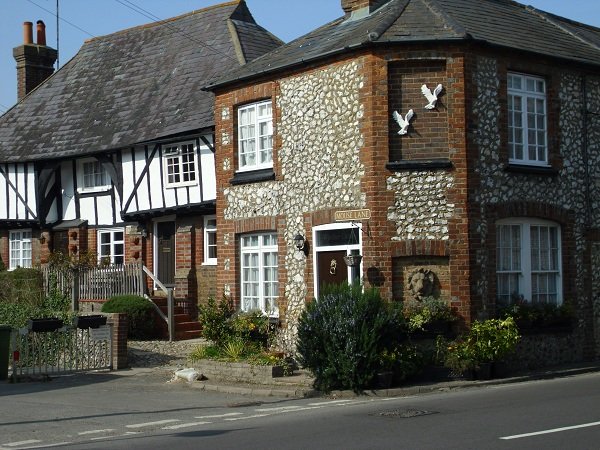 The building to the left in my photo is one of the many late-medieval timber-framed domestic buildings in the town. It is probably 15th-century and was used as the parish workhouse from the early 18th century until 1836.
Read about some of my favourite places to see and things to do in my Sussex Guide.

Learn more about the local area and receive special offers