Brighton is renowned for its diverse communities, quirky shopping areas and large cultural, music and arts scene.If you spend the day there you are guaranteed to find plenty to see and do.

Make sure you take a walk on the popular  Brighton Pier – great for all ages. … The pier is open throughout year with free admission.

There’s a fish and chip restaurant on the pier and deckchairs to relax on in the summer!

The ancient settlement of “Brighthelmstone” was documented in the Domesday Book (written in 1086). People first began to visit Brighton in the 16th century. Later it developed in popularity as a health resort for sea bathing – as a purported cure for illnesses.

It became increasingly fashionable in the late 1700’s. During this period The Prince of Wales, who later became George IV, first visited Brighton. He spent a lot of time living the high life in the town.

In 1815, George commissioned John Nash to construct the Royal Pavilion: It has an Indian styled exterior and a Chinese inspired interior.

The Royal Family continued to use the palace until after George IV’s death.  Queen Victoria though, disliked Brighton and the lack of privacy, especially once Brighton became accessible to Londoners by rail in 1841. Famously, Queen Victoria complained: “The people here are very indiscreet and troublesome.”

The Royal Pavilion is open to the public throughout the year apart from 24th – 26th Dec.  Admission: Adults £15.50 (Sept 2020) I really recommend a visit and suggest you hire an audio guide.  Read more about the Royal Pavilion here

Many people enjoy two deservedly popular districts: The Lanes – between the Royal Pavilion and the beach – and the North Laine area – close to the station. Both have excellent independently run shops, cafes and pubs.

The most recent new attraction is the British Airways i360 Viewing Tower on the beach. 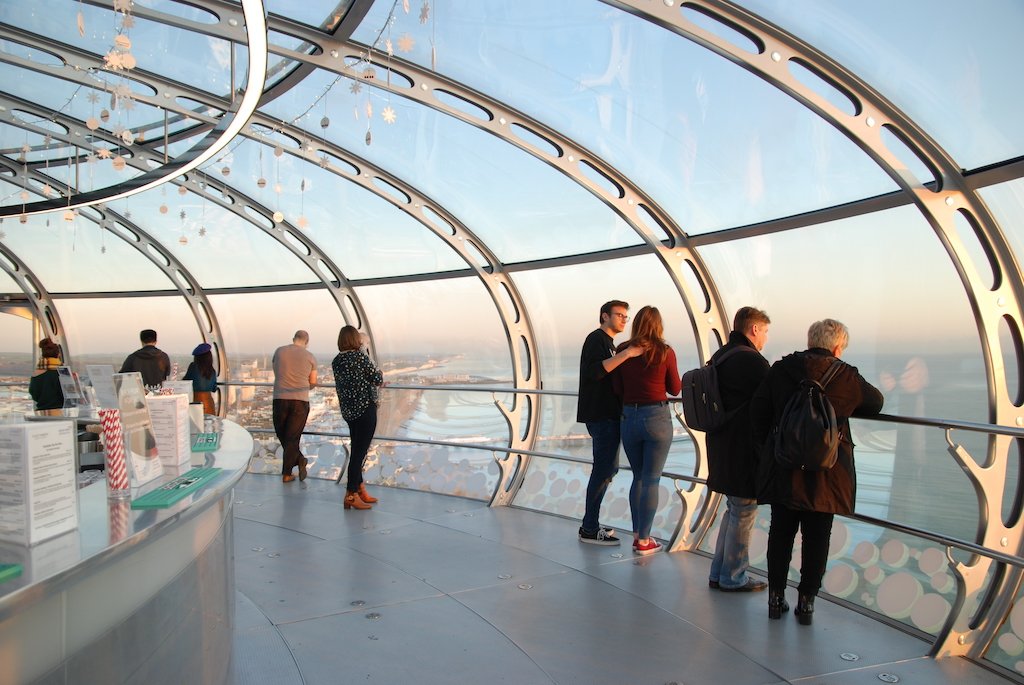 This is the world’s tallest moving observation tower. You can see fantastic views along the coast and over the South Downs whilst on the 25 minute ‘flight’. Afterwards you might want to call into the nearby Grand Hotel for a cup of coffee!

Another place to see is the now derelict West Pier – a favourite subject for photographers.

Are you looking for a holiday cottage?

If you plan to visit Brighton you may choose to stay in a quieter place nearby. You could consider Rosebud Cottage in Steyning 10 miles away. There is a regular bus service to Brighton and  frequent trains from nearby Shoreham by Sea.

Learn more about the local area and receive special offers