Steyning Parish Church has a long history dating back to the 8th or 9th century.

Legends claim that St Cuthman, a Saxon saint, was wheeling his invalid mother in a handcart when it broke. St Cuthman believed this was a sign from God that he should establish a church close by.

St Cuthman is depicted in three stained glass windows in St Andrew’s and St Cuthmans’s Church in Steyning. He is there as a shepherd, as a builder and with his mother in a handcart (in the photo)

St Cuthman could have had royal blood as Alfred the Great’s father Ethelwulf was buried in the churchyard in 858.

You can also see a modern sculpture of the saint opposite the church, which was made to commemorate the millennium.

Steyning Parish Church and the Normans

The Norman Church, from the late 1100’s, was nearly twice as big as the current building. It had transepts and a much longer chancel than the present 19th century one. It also had two extra bays at the west end of the nave, where the 16th century flint chequer work tower now stands.

The earliest part that remains is that which now forms the chancel arch. The surviving bays of the nave arcade, built around 1170-1180, have truly wonderful carving on most of the arches and capitals. There are the customary zigzags and scallops as well as many less conventional motifs and designs.

Do go and take a look!

Read more about the church

One of the prettiest I know in West Sussex.

The setting is lovely: You look up to the slope of the South Downs on the east side. The River Arun and the wild brooks are on the on the south and west sides.

The village has its own castle – in use as a hotel and wedding venue. Even if you are not staying at the hotel you can walk around the back of the building on your way into the wild brooks.

Whilst you are in the area do visit the Pulborough Brooks. This is an Royal Society for the Protection of Birds (RSPB) site – open throughout the year and a haven for birds. This area often floods in the winter.

Another place to see is the Working Museum. This is an interesting use of an old chalk pit above the railway station which is now home to old agricultural and industrial machinery, nearly all of it still functioning.

Many of the houses round here are truly beautiful, with thatched roofs and plenty of lovely old brick and tile work. You can see a couple in my photo below.

Amberley is a 30 minute drive from Steyning

Read about Arundel .. a short distance from Amberley

Don’t miss a chance to visit this market town. You’ll see medieval streets, old English churches and tiny twittens (a Sussex word for alleyway) . Although surrounded by chalk cliffs, the town is dominated by the remains of a 1000 year Norman castle (seen in my photo). Panoramic views are guaranteed if you climb to the top! The adjoining Barbican House is home to the Museum of Sussex Archaeology with local collections from the Stone Age to medieval times. A mini-cinema tells the story of Lewes from prehistoric to Victorian times.

Anne of Cleves house and Lewes Castle are currently closed (June 2020) due to coronavirus.

Lewes is also home to the town house of Anne of Cleves (fourth wife of King Henry Vlll) which I really love. Both the castle and Anne of Cleves house are open throughout the year. Details at http://sussexpast.co.uk

The town also has many contemporary art galleries and historic & special interest sites including the Priory of St. Pancreas – a former monastery.

You’ll come across numerous small, specialist, independent retailers and a local brewery. I recommend visiting Cliffe High Street. Bookshops, boutiques and antique shops are there as well as individual craft workshops. You’ll also find restaurants, cafes, and pubs offering tasty choices all year round with an emphasis on local produce.

Lewes is one of my favourite towns. I recommend a visit! It is 7 miles from Brighton & a 30 minute drive from Steyning. You can also reach Lewes by public transport.

Shopping in Steyning is a delight!

Shopping in Steyning is a pleasure with independent retailers running almost every shop in the High Street.

You will find a good selection of fruit and vegetables at the Sussex Produce Shop as well as dairy produce and some tasty ‘oven ready’ meals.

The High Street also has a Co-op supermarket and two independent butchers. 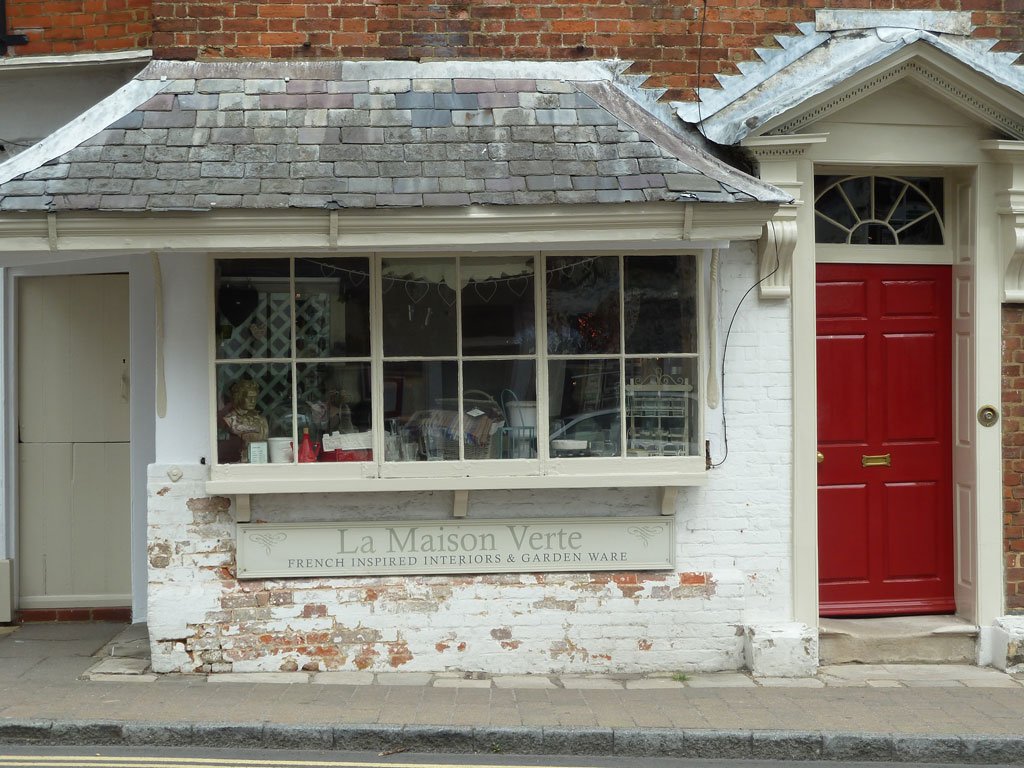 La Maison Verte is one of several shops where you might look for gifts.

Shopping in Steyning at Cobblestone Walk

Cobblestone Walk, just off the High Street, has a fascinating range of tiny outlets. These include a Baby Boutique and a Haberdashers.

There’s also an excellent book shop in the main street and many more you wouldn’t expect in a small semi rural town – including the amazing dolls’ house shop.

Not only can you buy a house  … furniture, lighting and accessories are available too. You’ll find roofing, flooring and wallpaper – even doors and windows if you have a restoration project.

As you will see in the photo you can even buy a greenhouse or shed!

Rosebud Holiday Cottage is just a couple of minutes walk from the High Street. Read more about the cottage

Bramber and St Mary’s House are well worth a visit.

Bramber  is a pretty village with some nature walks at Bramber Brooks. You will also find a pub and a Chinese restaurant!

Catch the no 2 bus to Bramber or drive and leave your car in the car park. It is just a mile from the centre of Steyning.

St Mary’s is a timber framed building constructed in around 1470 by the bishop of Winchester.  At that time pilgrims used the house as an inn on their way to the tomb of St Thomas of Canterbury.

The house has some most attractive gardens which you can explore. There are also some lovely cottage style tea rooms.

Both the house and gardens are usually open from the end of April to the end of September.  You can go there on Sundays, Thursdays and Bank Holiday Mondays (& Wednesdays in August) from 2 – 6 p.m.

Find out more about other local places to visit

There are two excellent local trails: The Lower Horseshoe and the more challenging Upper Horseshoe. This climbs high into the South Downs and then follows the horseshoe shaped ridge before descending back into the town. Whilst it is a short walk, the climb is fairly strenuous so it is ideal for people who may be short of time but still want a challenge.

The path follows chalk and clay paths which may be muddy after wet weather. There is a long and reasonably steep climb to reach the ridge and some sections of the descent are also a little steep. There are no stiles and just a few gates and kissing gates. Approximate time 1.5 hours.

Start by walking up Sir George’s Place in Steyning – just off the High Street. Turn right up a footpath when you see the tennis courts. Turn left just as you reach an open field for the Lower Horseshoe walk. Keep heading for the trees on the skyline for the Upper Horseshoe walk. Once you approach the trees you will be able to enjoy magnificent views down to Steyning and across the Downs to the east …

Bear left as you walk through the trees. When you leave the trees head along the footpath back down into the town. You will come into Newham Lane and later the High Street.

If you would like a longer demanding walk I suggest walking to Chanctonbury (3 miles) or further to Cissbury (5 or 6 miles).